Micromac Filtration has successfully completed a major refurbishment project on a Biotower operated by a market-leading UK-based specialist waste and resource management group delivering a broad range of services to the hazardous waste sector.

It was the first time that the Biotower had been overhauled and despite the project proving to be considerably more arduous and labour intensive than first envisaged, Micromac still succeeded in bringing the project to a successful conclusion on time and within budget.

Standing at over 7 metres high and with a 15 metre diameter, the Biotower is located in the South West.  It was installed in 2001 to treat waste output from the on-site effluent plant prior to discharge to a sewer.  The waste materials treated are primarily waters split from waste oil / water mixtures on site, and incoming waste water contaminated with organics that cannot be put to sewers by the waste producer.

The Biotower is a large tank filled with plastic media.  The effluent to be treated is pumped to the top of the tank, sprayed through four rotating distribution arms evenly over the plastic media and trickles through it to the base of the tank where it collects in a sump.  The effluent is recirculated several times through the tower, prior to flowing over a weir to discharge.  The plastic media has a high surface area, and the trickling process enables the effluent to be oxygenated so bacteria and other organisms can grow.  These organisms eat the contaminants within the effluent, cleaning it to a state that can be legally disposed of to the sewer. 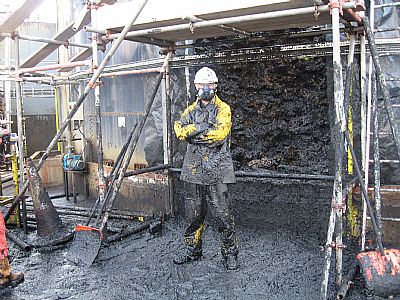 Micromac was appointed to remove all the old media, which was very heavily contaminated and ineffective, and replace it with new media.  It was a strenuous task since the media had to be manually removed before the tank was cleaned and a new floor built to provide support for the fresh plastic media, which was blown in.

The project took just over a month, with Micromac teams working seven days per week from start to finish in order to complete the job.  The Biotower is working again and its rate of recovery has exceeded expectations, leading to increased bottom line financial efficiency for its owners.

“Originally, we were attracted to Micromac by the timescales they proposed and their reasonable costs,” explained the site manager.  “However, in hindsight, what worked best for us was Micromac’s ability to run the project without too much disruption to our site and minimal input from our own personnel.  Based on our experience of working with the Micromac team, we would certainly work with them again on projects in the future.”

The Biotower refurbishment was the first time that Micromac had worked on such an application and the team were able to bring knowledge and experience of working in other industry sectors with heavily contaminated materials.

“It wasn’t until we opened up the Biotower that we realised just what a challenge we had on our hands,” commented Peter Jennison, Service Manager at Micromac Filtration. “Not just the degree of excess biomass that we found, but also the tight timescales that we had undertaken.  Despite this, we battled through and delivered a solution which meets our professional standards, on time, in budget and without cutting any corners.”