A major supplier of fresh made cakes to Tesco Supermarket and requiring 24-hour production, the baker has seen its Cornish production centre double in size over recent years.  In line with its production expansion, the company found that wastewater discharge was an increasing problem.  Being charged for discharges according to the Mogden Formula, effluent was becoming an increasingly expensive cost centre.

“Our choice of technology supplier was important and one where we invested a lot of time and effort before selecting Micromac,” commented the hygiene manager at the company.  “Obviously, the application of appropriate technology is key but on top of this we needed a team that understood our business, our needs and how to support them.  We are delighted with the service provided by Micromac.”

The effluent produced by the company’s large scale baking operations presents a challenge to any treatment system: it is high in suspended solids, fats, oils and greases, plus it presented high chemical oxygen demand.  Micromac’s solution was to upgrade the existing elements of the factory’s effluent treatment system and to introduce new system elements, which simplified system operation and increased system capacity.  All the new system components were designed, supplied and installed by Micromac. 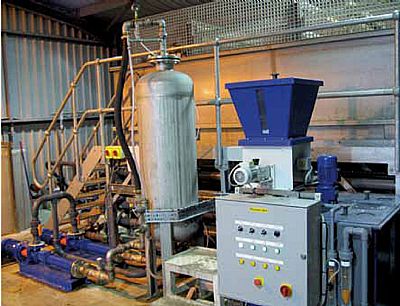 Micromac redesigned the layout of the effluent treatment house on site, providing space for a new Dissolved Air Flotation (DAF) system, which itself created a five-fold increase in system capacity.

An ineffective rotary unit was replaced by Duty Standby Run Down Screens (RDS) and the existing Bio Tower was modified to increase reductions in chemical oxygen demand.  Both these elements were relatively low cost and proved to be highly cost-effective solution components for the customer.

“The results speak for themselves,” stated the hygiene manager. “The new machinery is high quality with minimal moving parts and therefore low maintenance requirements. The DAF unit is fantastic – it achieves over 95 per cent reductions in suspended solids, fats, oils and greases, and it’s totally reliable in its operation.  In addition, Micromac Filtration provides Planned Preventative Maintenance, which has led to a major reduction in system downtime – in fact we haven’t suffered a major stoppage for over a year.  The system works reliably, the control interface is intuitive and Micromac continue to support us – what more can you ask?”